New and improved by the makers of Thermo-Lift Classic, Raspberry Ketones Supreme is one of the most advanced weight loss and wellness formulas of its kind. In addition to weight loss and slimming, it has one of the longest lists of science-backed benefits for your health.

The constituents that comprise Rasperry Ketones Supreme have a multitude of scientific studies supporting their effectiveness; these studies have been conducted by some of the most respected medical universities and laboratories in the world by expert scholars, chemists, scientists and medical professionals.

Raspberry Ketones Supreme is a complex of many beneficial ingredients including the immune system booster: green tea. Studies show that a key component of green tea, epigallocatechin gallate (also known as EGCG) can boost the immune system and aid in recovery after exercise and oxidative stress. According to research from the Linus Pauling Institute at Oregon State University: green tea compounds can increase the number of “regulatory T cells” that play a key role in immune function.

Raspberry ketones have been shown to decrease body triacylglycerol5 (also known triglycerides).6 Triglycerides are the main constituents of body fat in humans.7 In the human body, high levels of triglycerides in the bloodstream have been linked to atherosclerosis and, by extension, the risk of heart disease8 and stroke.9

In stem cell research it has been shown that raspberry ketones promote bone growth10 which can become important as the human body ages, especially when dieting, to maintain height, posture and bone strength.

African mango, also known as Irvingia gabonensis, is the name given to an African tree that bears mango-like fruits and nuts. Clinical trials have shown that extract from African mango causes weight loss in both men and women.11 These trials also showed a reduction in “bad” LDL cholesterol and leptin while recording an increase in adiponectin, which has been linked to weight loss and improved health. Low levels of adiponectin have been associated with obesity, cardiovascular disease and type 2 diabetes.12

African mango extract is a source of soluble fiber. Supplementing with water-soluble fiber, often called bulk-forming laxatives, delays stomach emptying which leads to a more gradual apsorption of dietary sugar.13 This can help control appetite after meals14 and reduce cholesterol.15

Green tea contains epigallocatechin gallate (EGCG) which is a type of catechin that has been shown to decrease body fat and lower cardiovascular risks in humans.16 Epigallocatechin gallate is also recognized as a natural immune system booster according to research at healthline.com, sciencedaily.com and the Linus Pauling Institute at Oregon State University. Numerous studies have linked green tea consumption to increased fat burning (fat oxidation) and accelerated metabolism (energy expenditure).17 18 19 Research has also shown that green tea increases metabolism around the clock, even while the body is at rest.20

Caffeine is a zero-carb, zero-sugar and zero-calorie stimulant that has been shown to increase resting metabolic rate21 and reduce body weight.22 Caffeine is the world’s most widely used stimulant, and it’s used to reduce fatigue, enhance performance and prevent drowsiness, in addition to supporting weight loss.23

Apple cider vinegar contains acetic acid which research has shown to cause weight loss and lower the particularly dangerous fat known as belly fat or visceral fat.24 Visceral fat lies deep in the abdominal cavity (unlike subcutaneous fat which is on the surface) and it can build up around the heart, lungs, liver and other organs. This deep abdominal fat not only causes the midsection to bulge, it has been linked to heart disease and diabetes.

Aliginate or aliginic acid is another component of kelp that has been linked to weight loss. Research shows that alginates inhibit pancreatic lipase. Pancreatic lipase is important in dietary triacylglycerol (triglyceride) breakdown; reducing pancreatic lipase activity reduces triacylglycerol breakdown resulting in lower amounts being absorbed by the body.32 In the human body, high levels of triglycerides in the bloodstream have been linked to atherosclerosis and, by extension, the risk of heart disease33 and stroke.34

Kelp is a source of iodine. Iodine can help improve thyroid function and prevent hypothyroidism35
a condition in which the thyroid does not produce enough thyroid hormone. Hypothyroidism can cause a number of health problems including obesity, joint pain, infertility and heart disease.36 The body does not make iodine so it is essential to obtain it through food or supplementation.37

Research trials on human subjects have shown that grape seed extract can help improve cardiovascular health by reducing blood pressure; these same studies associated a reduction in body mass with the healthy change in blood pressure.38 Vitamin E, flavonoids, linoleic acid, and OPCs are highly concentrated in grape seeds.39 OPCs (oligomeric proanthocyanidin complexes) are antioxidants that destroy free radicals, which are harmful compounds in the body that damage DNA (genetic material) and even cause cell death. Scientists believe free radicals contribute to aging, as well as the development of a number of health problems, including heart disease and cancer. Studies have also shown that flavonoids, such as those found in grape seed extract, can improve digestive health40 41which in turn supports weight loss. The highest quality grape seed extract from organic grapes has been included in Raspberry Ketones Supreme to enhance weight loss, improve heart health and boost digestive function. 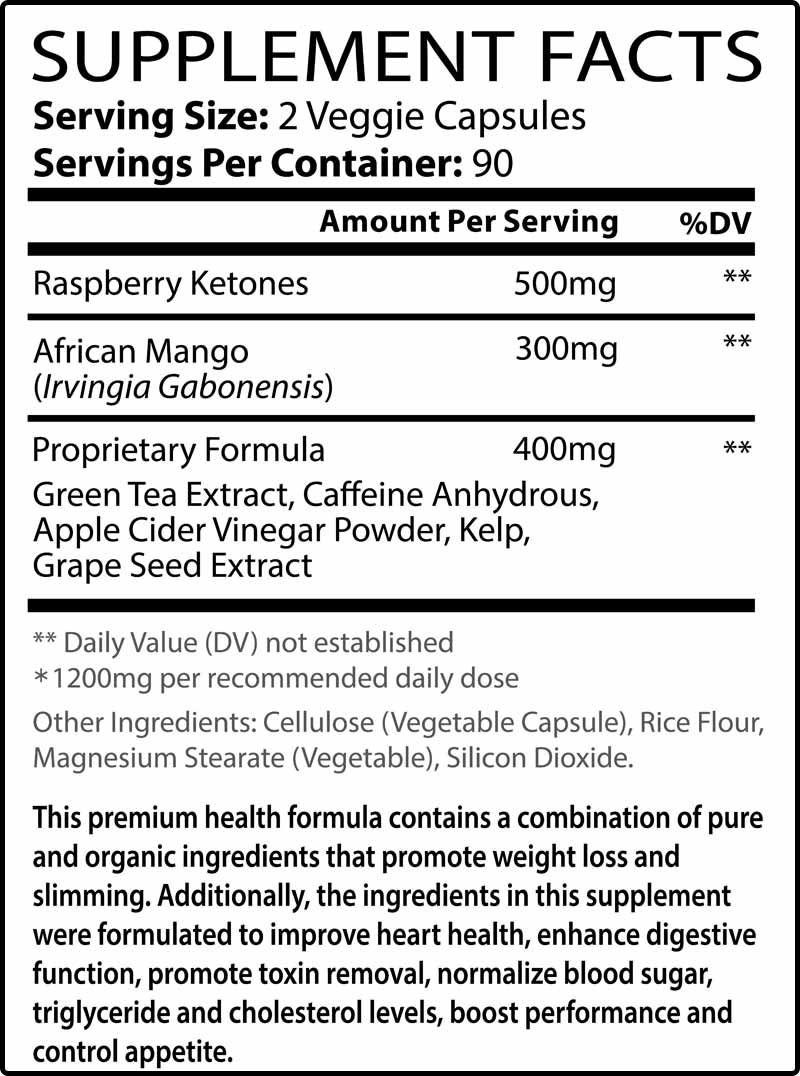